Oceanic delphinids are generally not endangered, nor have they been observed in mass-stranding events associated with Navy sonar, but these taxa include some of the most common protected marine mammal species (e.g., common dolphins Dephinus sp., bottlenose dolphins Tursiops truncatus) exposed to sonar in high numbers in some Navy operational areas. Consequently, they represent a large proportion of predicted negative effects of sonar operations (e.g., behavioral harassment) for many Navy environmental compliance assessments. Their response probabilities have been inferred from laboratory measurements and/or from anecdotal field observations in uncontrolled contexts, each of which have significant limitations. Within this project, we’ve developed innovative methods to measure both broad and fine-scale group and individual observations and conduct the first-ever experimental behavioral and physiological response studies (BPRS). To do this, we’ve developed a novel integration of established methods to quantify behavior in four delphinid species (long and short-beaked common, bottlenose, and Risso’s (Grampus griseus) dolphins) frequently exposed to Navy mid-frequency active sonar (MFAS) off California. We’re carefully conducting CEEs within all these species and evaluating responses to either simulated mid-frequency (3-4 kHz) active sonar (MFAS) or real Navy sonars used in training operations using controlled exposure experiments (CEEs). The nature of the resulting data is categorically different from previous response studies involving tagging of single individuals, with focus on both broad scale and finer-scale group movement patterns, behavioral cohesion and other social factors, including group acoustic behavior. Beyond the fact that retaining tags on individuals of these species has proven difficult or infeasible to date, these social species typically occur in groups and therefore behavioral similarity or variance between group members needs to be quantified to describe their responses to disturbance. We are also collecting tissue biopsy samples at known and controlled periods following noise exposure to compare stress hormone levels for animals known to be exposed at specific levels with control (unexposed ones). The results are providing a huge trove of new information on basic aspects of biology and behavior in these protected species, as well as novel information on behavioral response that is being directly applied in improving regulatory assessments of how MFAS may affect them.
2019 Final Report  |  2018 Final Report
Our partners on this project include: Cascadia Research, Kelp Marine Research, NOAA’s Southwest Fisheries Science Center, and SR3. This project is supported by the U.S. Office of Naval Research. 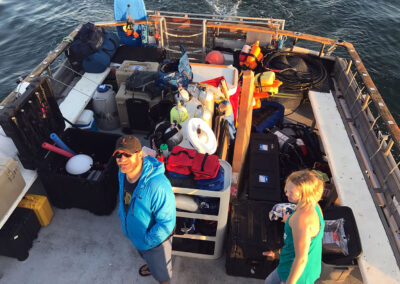 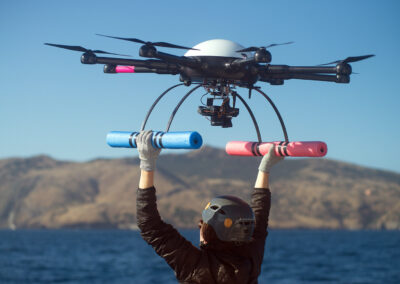 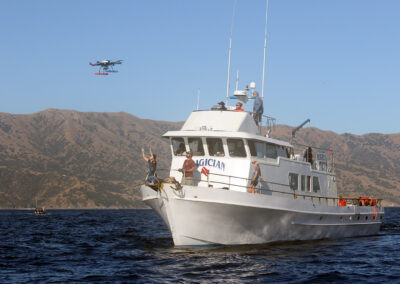 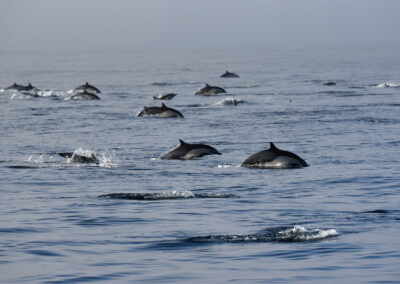