This project involves field controlled exposure experiments (CEEs) to quantify the behavioral response of Cuvier’s beaked whales and short-finned pilot whales to tactical mid-frequency (3-4 kHz) active sonar (MFAS) off Cape Hatteras, North Carolina. The objective is to provide direct empirical measurements of behavioral response in relation to key exposure variables, including received exposure level, proximity to the source, and behavioral state. A multi-scale approach is applied, with simultaneous deployment of high-resolution, short-duration, archival acoustic and movement tags and lower-resolution, longer-term, satellite-linked depth-recording tags. Unlike many previous studies, this study is not being conducted on a training range, where animals are exposed to frequent bouts of intense sonar activity, but, instead, an area where MFAS is used infrequently, so that animals may be familiar with, but not habituated to sonar. Modeled and measured received levels range up to 140 and 150 dB re 1 uPa for beaked and pilot whales, respectively. During the first three years of this project, we have tagged 46 Cuvier’s beaked whales and 49 short-finned pilot whales and conducted 14 controlled exposure experiments (CEEs), each with multiple tagged individuals of both species, including three trials with full-scale tactical MFAS systems from Navy ships, nine trials with a high-power simulated MFAS, and two no-sonar controls. We noted behavioral response in some, but not all, individuals, including short-term changes in diving behavior and in some cases strong and obvious horizontal avoidance. We did not observe any large-scale abandonment of habitat in either species, and behavioral responses were generally ephemeral, with animals resuming typical diving behavior within hours of exposure to MFAS transmissions.

Our partners on this project include: Duke University Marine Laboratory, Sea Mammal Research Unit, Calvin College, Bridger Consulting, and the Naval Postgraduate school. This project is supported by the U.S. Navy Fleet Forces and NAVFAC. 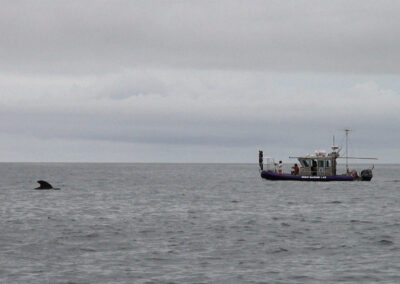